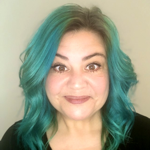 Andrea is a graduate of the American Academy of Dramatic Arts. She has spent 20 years in the education field working as a teacher, trainer, assistant and Director. She has taught standards-based theatre classes, served as Education Director, and taught theatre at summer camps. Some of her favorite credits include: Diary of Anne Frank (Mrs. Van Dann) and The Little Mermaid (Ursula). TV Credits include: Vice Principals (Mrs. Holloway). Centerstage patrons will recognize her from our stage where she was in Within the Law (Sarah Edwards and Frannie).

Audiences may remember Tempest from her performances in The Complete Works of William Shakespeare (abridged) and Robin Hood at Centerstage. Tempest studied Theater & Performance Studies at the University of Chicago. Her teaching repertoire covers everything from devising political theater with 10-year-olds to teaching adults to slip on banana peels.

Mickey is known for playing Christopher Boone in The Curious Incident of the Dog in the Night Time at Syracuse Stage and Indiana Repertory Theatre, and the title role in Amadeus at Syracuse Stage. He has directed a school touring show for La Jolla Playhouse and is the founder and Artistic Director of National Disability Theatre.

Helen is very familiar to Centerstage audiences, as she’s spent 3 of the past 4 years enchanting holiday audiences as our Panto princess! She was our Red in Little Red Riding Hood, Belle in Beauty and the Beast and most recently Maid Marion in Robin Hood! If you have a little one who dreams of being the Panto princess one day, here’s their chance to be taught by one!

Past education offerings include:

Celebrate Centerstage, our annual fundraiser, will be held on
Saturday, May 6, 2023
Watch this space for more information.

While we no longer require proof of vaccination or a negative COVID test to attend our shows, we still ask patrons to wear a mask for the show. Click here for more information.